If you keep your eyes peeled you may see our clockmaker Steve Morson around in our new van with new livery across the UK, Steve joined our team recently due to the increase in demand we are experiencing from our clients across the UK. 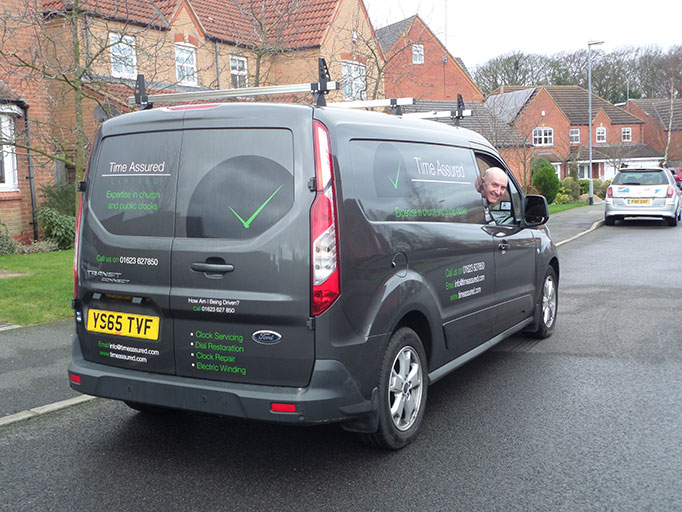 You may also have noticed recently that we’ve given our web site a little refresh, we hope you agree it’s a great progression on the previous site which we had built when we first formed the company, the new site is optimised to view nicely on devices of all sizes and showcase our latest work and services as well as providing vital information to potential and current clients.

Take a look at our new clocks page for the latest addition to the Time Assured list of services.

The clock mechanism at St Thomas’ Church, Heighington, is a flatbed hour strike with a pinwheel escapement. It was manufactured in 1924 by J Smith & Sons. The movement drives one, approximately 3ft diameter raised figure cast iron dial. The clock mechanism, like many others across the country, is classified as a war memorial and is looked after by Heighington Parish Council.

When we originally inspected the clock the escapement was slightly out of beat and in need of a clean. The dial was also a little worse for wear. At this stage the clock mechanism was hand wound. We were then tasked with thoroughly cleaning and lubricating the mechanism, installing electric automatic winding, automatic regulation and restoring the dial. 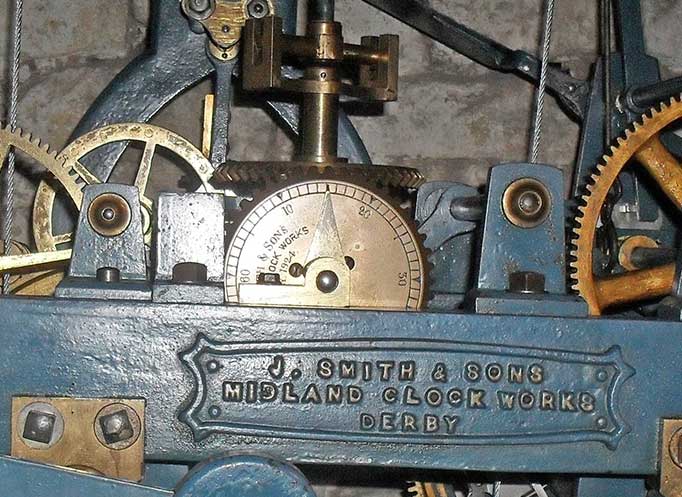 Dial restoration before (left and after (right) 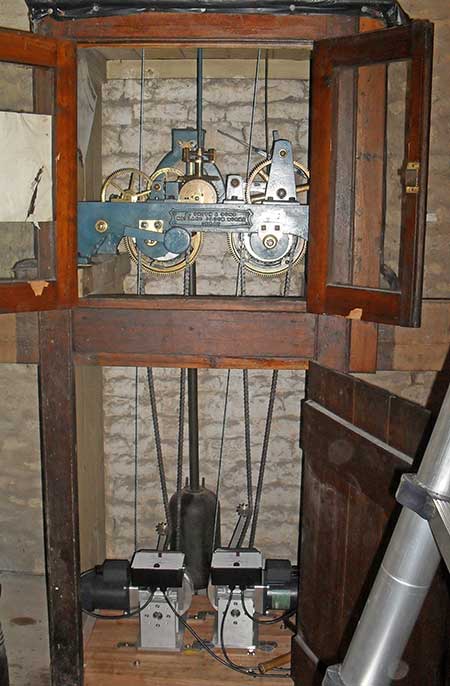 St Thomas’ Church need no longer worry about winding or regulating the clock. Automatic Winding keeps the clock constantly working and automatic regulation makes sure the clock is on time and also adjusts for the GMT & BST changes in March and October. For further peace of mind, the equipment comes with a Ten Year Manufacturer’s Guarantee.

Automatic Regulation adjusts the pendulum to make sure the clock keeps good time.

In the late summer of 2014, we were invited by Goldsmith’s Jewellers to inspect a number their clocks located at their Jewellery Stores. One particular clock that was in need of care and attention was an iconic projecting clock situated on Blackett Street in the centre of Newcastle.

The store was about to undergo a major refurbishment and the projecting clock which is the outstanding feature on the front of the store needed serious refurbishment. Close inspection revealed outward signs of corrosion and resulting in structural issues. Goldsmith’s asked us to proceed with the refurbishment. The flagship Newcastle Goldsmiths store was to undergo a complete makeover and we were given just nine weeks to meet the deadline for store opening. 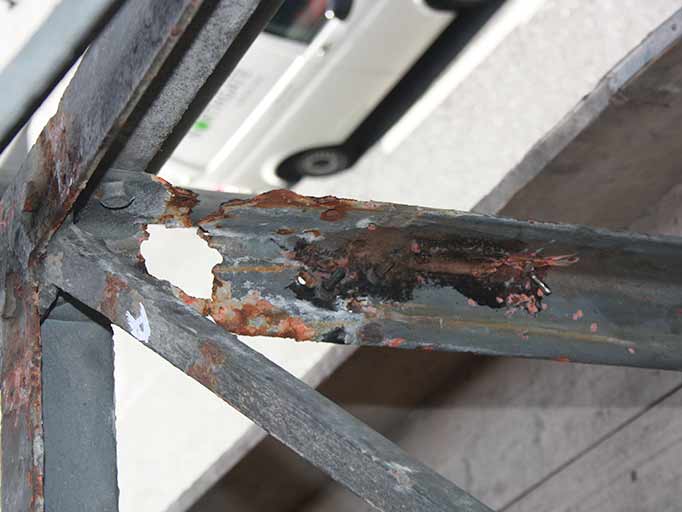 The clock after restoration

Then after nine hectic weeks, around 2500 sheets of 231/2 carat english double thickness gold leaf, well over 300 man hours, new movements and lighting, and a few surprises along the way, the finishing line was crossed. Talking of surprises, the lady who stands atop the clock was our first surprise, at 4’ 6” tall we assumed she might be a lightweight. She actually turned out to be a lady of substance, or rather solid bronze. 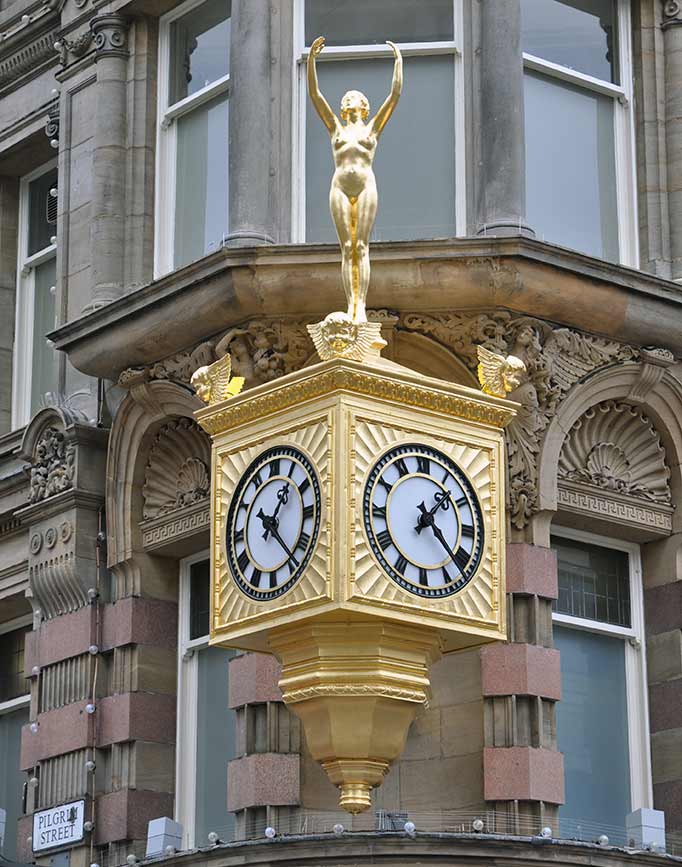 We have received excellent feedback from Goldsmiths who in turn mentioned that they had received extremely complimentary reviews from around Newcastle.

Time Assured recently repaired the Church Clock at St Andrew’s Church in Lincolnshire. The problem was located in the dial motion works which lay behind the dial. Our IRATA qualified clockmaker Terry Hill used roped access techniques initially to approach the dial and remove the clock hands. The dial motion works where then removed, cleaned, repaired and lightly lubricated at ground level. Terry then approach the dial for as second time using roped access to re-install the repaired dial motion works and re-fit the clock hands. The clock is now running normally again and the people of Heckington have an accurate clock.

A passing photographer Steve Parry was passing at the time and took a short video of Terry and Peter at work. During the short time he was filming, he also managed to capture a fly past by the Red Arrows Aerobatic Team just the work was nearing completion.

Time Assured takes Health and Safety very seriously. Roped Access is only used by our IRATA trained clockmaker, Terry and he is required to undergo training and a test every two years to maintain his certificate and permit to use roped access. As part of the Health & Safety guidelines, a second person is required to be present to keep an watchful eye on the clockmaker undertaking roped access and raise the alarm should he get into difficulty. In this case our second clockmaker who both helped with the repair and acted as safety cover was Peter Lane.

A passing photographer Steve Parry was passing at the time and took a short video of Terry and Peter at work. During the short time he was filming, he also managed to capture a fly past by the Red Arrows Aerobatic Team just the work was nearing completion.

Occasionally it is required when repairing clocks to work at height or access clock dials and bells that are awkward to get to. Sometimes scaffolding which can be quite expensive is required, however using roped access can be a safe and cost effective alternative.

In order to be able to use roped access a clockmaker is required to undergo and pass rigorous training with IRATA (Industrial Rope Access Trade Association). This certification lasts three years before it is required to be renewed.

Health and Safety regulations require that a second person is on site at all times that roped access is being undertaken. This is to ensure that should the situation arise, the emergency services can be called promptly without delay.

Roped Access safety methods can also be deployed in other situations such as a secondary safety backup system when using ladders. This is illustrated in the series of photographs below highlighting the servicing of a Church Bell and associated striking equipment. The equipment was situated on the top of a very steep Church roof. Although a ladder and roof ladder was used as the primary means of access, whilst a secondary backup safety system was employed using a safety harness and secured ropes. A catapult fired a line over the Church roof and this was used to pull a rope over the roof which was then securely tied. The clockmaker used the rope secured to his harness as a backup safety system while attending to the bell equipment from a roof ladder.

The safety of our clockmakers is paramount and this also gives peace of mind not only to ourselves but also to our customers.

During April 2012, St James Church in Shardlow commissioned us to repair the disabled Strike Train of the Clock and install Night Silencing.

The sound of the hour strike can now be heard around Shardlow, but the installation means the local residents can still get a good night’s sleep. 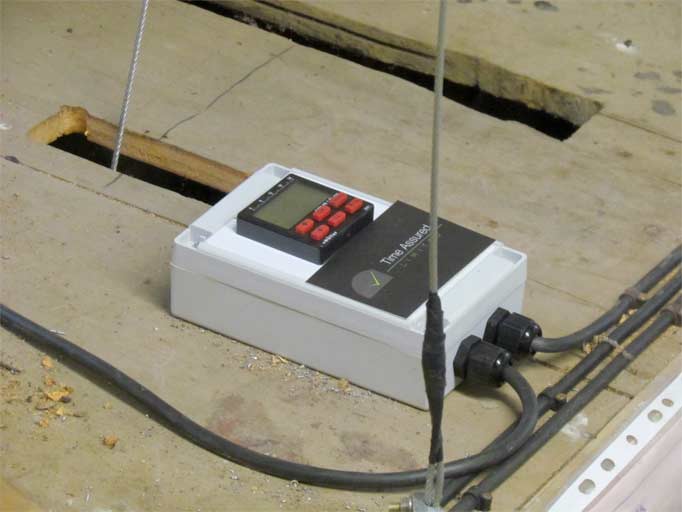 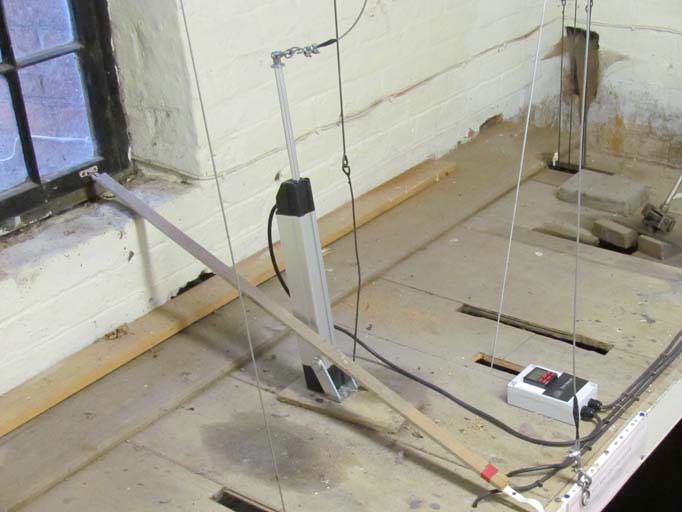 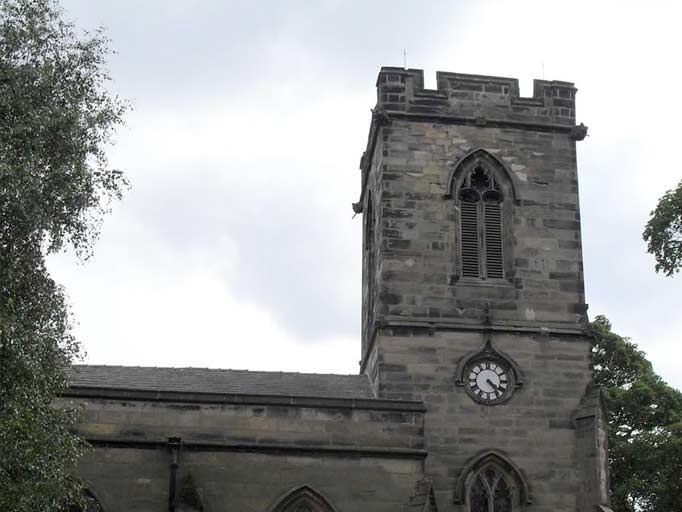